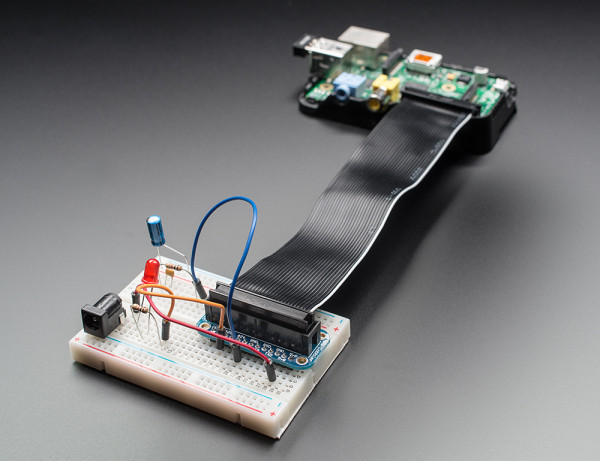 Now that you've finally got your hands on a Raspberry Pi® , you're probably itching to make some fun embedded computer projects with it. What you need is an add on prototyping Pi Cobbler from Adafruit, which can break out all those tasty power, GPIO, I2C and SPI pins from the 26 pin header onto a solderless breadboard. This set will make "cobbling together" prototypes with the Pi super easy. Designed for use with Raspberry Pi Model B AND Model A, both revisions.

This Cobbler is in a compact shape, which is the least bulky way to wire up.

The Pi Cobbler mini kit comes with a fully assembled PCB with socket and headers as well as a 26 pin ribbon cable No soldering required! The cable plugs between the Pi computer and the Cobbler breakout. The Cobbler can plug into any solderless breadboard (or even a prototyping board like the PermaProto). The Cobbler PCB has all the pins labeled nicely so you can go forth and build circuits without keeping a pin-out printout at your desk.Adafruit think this will make it more fun to expand the Pi and build custom circuitry with it.

The Adafruit Pi Cobbler is compatible with both versions 1 and 2 of the Raspberry Pi Computer - for version 2 computers, note that the GPIO #21 has been replaced with GPIO #27 and that the I2C pins are now I2C port #1 instead of #0. All other pins are the same.

The Raspberry Pi® is a single-board computer developed in the UK by the Raspberry Pi Foundation with the intention of stimulating the teaching of basic computer science in schools. The design is based on a Broadcom BCM2835 system on a chip (SoC), which includes an ARM1176JZF-S 700 MHz processor, VideoCore IV GPU, and 256 megabytes of RAM. The design does not include a built-in hard disk or solid-state drive, instead relying on an SD card for booting and long-term storage. The Foundation plans to support Fedora Linux as the initial system software package/distribution, with support for Debian and Arch Linux as well -Wikipedia.