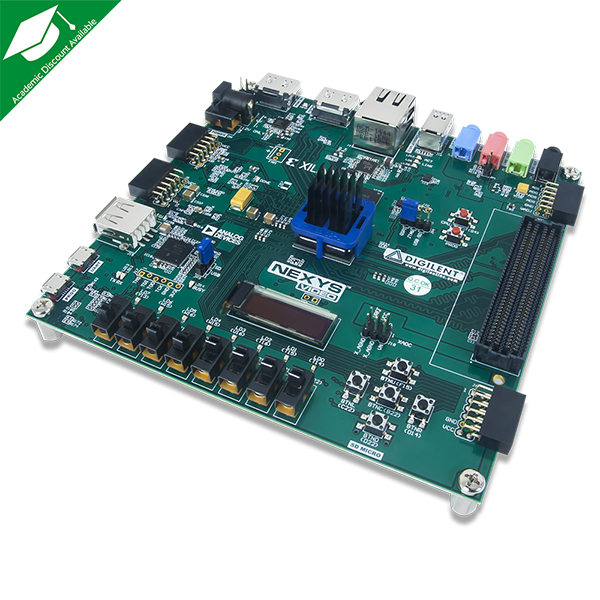 The Nexys Video  (previously announced as the Atlys 2), is the latest addition to our Nexys line of FPGA boards, and was designed with audio/video enthusiasts in mind.

The Nexys Video features several components that make it ideal for developing audio/video applications. The Artix®-7 XC7A200T FPGA is the most powerful chip from the Xilinx® Artix-7 family. A Mini DisplayPort source provides the board with a uni-directional, high-bandwidth, low-latency audio/video channel. Designed with high bandwidth external memories, three high-speed digital video ports, and a 24-bit audio codec, the Nexys Video is a potent platform for A/V development.

The Nexys Video is compatible with both ISE® and Vivado® toolchains. It is supported in the free WebPACK™ versions of these two tools so designs can be implemented at no additional cost. The free version of Vivado even includes the ability to create MicroBlaze™ soft processor designs. We also sell a device-locked version of the Design Edition of Vivado Design Suite, which you can bundle with your Nexys Video when you add it to your cart.* This edition unlocks the Logic Analyzer functionality of the toolset.

*Design Edition licenses for Vivado are not yet available to purchase with the Nexys Video. We are working to get them in stock and hope to have them for sale soon.

Programming: Compatible with both ISE and Vivado toolchains