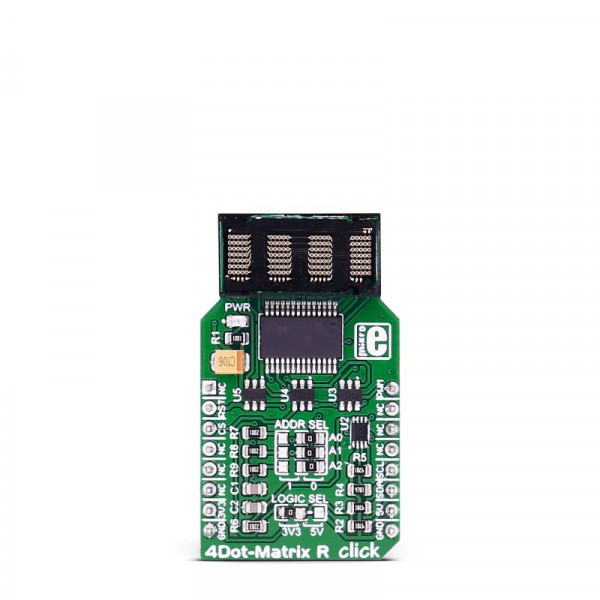 The display contains all the necessary logic for displaying of characters: integrated ASCII decoder, multiplexer, and drivers make the operation simple and straight-forward. The blanking pin allows a display to be turned off completely or dimmed by applying a PWM signal to this pin. To allow control by using a low pin count, the Click board™ is equipped with the additional circuitry, consisting of an I2C port expander, offering control by only two pins, via the mikroBUS™ I2C interface. These features allow simple and fast development of various applications, which require displaying of characters, numbers, or both.

4Dot-Matrix R click uses the SLO2016, 4-Digit 5x7 dot matrix alphanumeric Intelligent Display® device with the integrated memory, ASCII decoder, and driver sections, from Osram. This allows a high autonomy of the module, without any type of display refresh or multiplexing within the application. The character selection is easy, and it is done via the parallel interface, asynchronously. The logic states on seven data pins (D0 to D6) are translated into seven characters selection bits, with two additional pins, used to select the display position of the character (A0 to A1). There are four possible position selections in total, starting with the position 0 at the rightmost position. 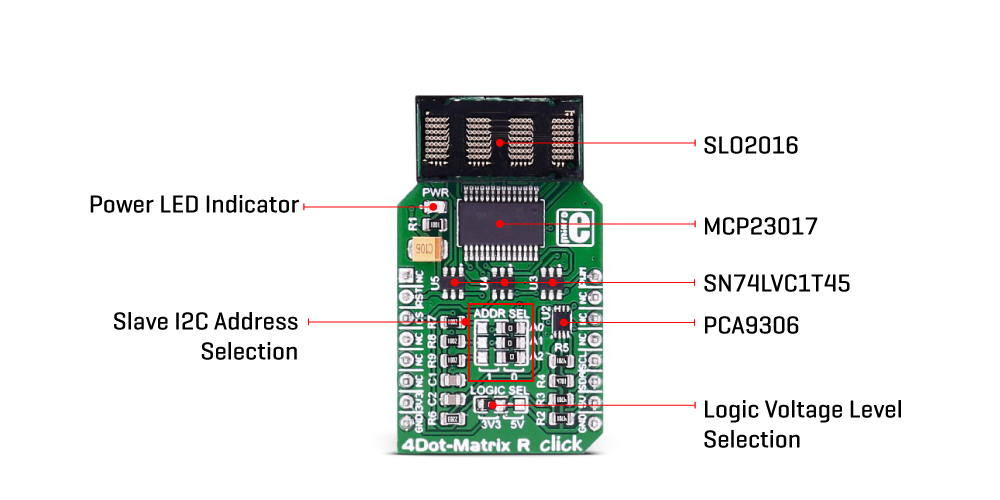 The display module contains internal memory with 128 ASCII characters. It contains some special characters too, including letters for English, German, Italian, Swedish, Danish, and Norwegian languages, as well as some other special characters and symbols. The internal character memory cannot be altered, it is read-only. A character which is once selected and displayed at the specific position will remain lit, as long as there is a power supply, or unless it is blanked out or changed. The module itself operates at 5V.

To provide the top performance, each module is tested and subjected to the burn-in procedure. A special care is taken by the manufacturer for each pixel to be displayed equally bright and clear. The display is robust and can sustain a significant electrostatic discharge (ESD). However, a care should be taken when working with the device, since not all the components are ESD resistant.

The parallel data interface is coupled with the MCP23017, a 16-bit I/O expander with I2C interface, from Microchip. This device allows using only two pins (I2S Clock and I2S Data) to control all seven data bits and two more position bits. The expander pins on the B port are used as the character selection pins, while two pins from the A port of the expander are used as the positional data pins. The rest of the control lines, such as the #BL (display blanking), #WR (write enable), and #CLR (memory clear) are routed to the mikroBUS™ PWM, CS, and RST pins, respectively.

Applying a PWM signal to the #BL pin of the display module will allow dimming of the display, depending on the duty cycle of the input signal. To completely dim the display, the BL pin needs to be pulled to a LOW logic level. It is also possible to dim the display by displaying the blank characters. The recommended frequency when using the PWM dimming function is 2.5 kHz and above.

The I2C address of the port expander can be selected by switching three onboard SMD jumpers, labeled as ADDR SEL. These jumpers define the least significant bits of the I2C address, so more than one device can be used on the same I2C bus. Besides the I2C address, it is possible to select the communication voltage level, by switching the SMD jumper labeled as the LOGIC SEL. For this purpose, four-level shifting ICs are employed, of which three are labeled as SN74LVC1T45, single-bit dual-supply bus transceivers, and one for the I2C signal, labeled as the PCA9306, a dual bidirectional I2C bus voltage translator, both from Texas Instruments. These ICs allow simple and reliable bit level shifting functions, by utilizing two different reference voltages to which the logic levels are translated. This allows the Click board™ to be interfaced with both 3.3V and 5V MCUs.

This table shows how the pinout on 4Dot-Matrix R click corresponds to the pinout on the mikroBUS™ socket (the latter shown in the two middle columns).

4Dot-Matrix R click features a jumper for setting the voltage logic level. By default, it's soldered to a 5V position.

This library contains functionalities for initializing 4DotMatrix click and communication with it. Communication is done with an MCP23017 16 bit I/O expander via I2C interface. MCP23017 directly communicates with an SLx2016 display to show the characters. All the functions work in a similar fashion, in that they send a character, or several of them, to be displayed. It is possible to send single characters on any of the four display positions, a string of characters, or integers in any numeral system. C4DOT_BL_PIN should be either set to high or should be connected to a PWM module, in which case it would be possible to blink the display or change its intensity.