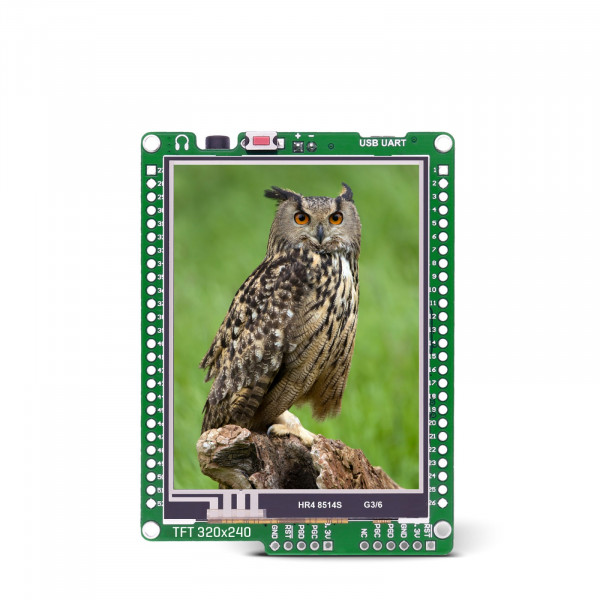 Mikromedia for PIC18FK is a compact smart display and development platform with the PIC18F67K40microcontroller from Microchip. The large 320x240 TFT color display will allow you to build multimedia applications with speed and ease. You can use it for development and as a final product.

A 320x240 TFT Color Display with Touch Screen and Stereo MP3 Codec chip, microSD™ card, a preprogrammed PIC18FK MCU and compiler support — you are set for creating some amazing projects. The development system features a TFT 320x240 display covered with a resistive touch panel. Together they form a functional unit called a touch screen. It enables data to be entered and displayed at the same time. The TFT display is capable of showing graphics in 262.144 different colors. It fits in your pocket

The board is carefully designed to be very compact and handy. We have used the highest quality components and 4-layer PCB to achieve maximum efficiency. The new PIC18F K-series are now the highest performance members of the PIC18F family offering up to 64 MHz operation with 16 MIPS. Operating range of 1.8 to 3.6 volts with 100K write endurance and a 40 year retention typical for both Flash and Data EEPROM memory.

Battery charger on board You can save pictures, sounds and other media files on microSD™ memory card and 8Mbit Serial Flash Memory and use it in your application.

Mikromedia for PIC18FK is fully supported by mikroC, mikroBasic and mikroPascal compilers for PIC. Compilers come with dozens of examples that demonstrate every feature of the board.

Spend less time programming and more time focusing on the design and functionality of your project. Create vibrant and colorful graphic user interfaces for mikromedia in the Visual TFT software. On-board PIC18FK is preprogrammed with fast USB UART bootloader, so it’s ready to work right out of the box. You don’t have to spend a dollar more on programmers. For those who need it, the board can also be programmed and debugged using the external mikroProg programmer.