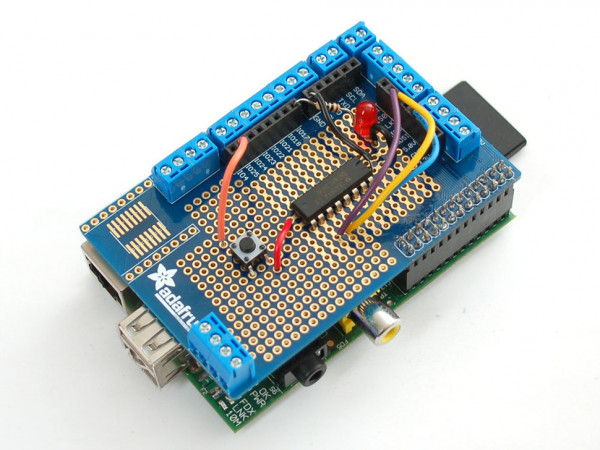 Now that you've finally got your hands on a Raspberry Pi® , you're probably itching to make some fun embedded computer projects with it. What you need is to add on prototyping Pi Plate from Adafruit, which can snap onto the Pi PCB (and is removable later if you wish) and gives you all sorts of prototyping goodness to make building on top of the Pi super easy.

We added lots of basic but essential goodies. First up, there's a big prototyping area, half of which is 'breadboard' style and half of which is 'perfboard' style so you can wire up DIP chips, sensors, and the like. Along the edges of the proto area, all the GPIO/I2C/SPI and power pins are broken out to 0.1" stips so you can easily connect to them. On the edges of the prototyping area, all of the breakout pins are also connected to labeled 3.5mm screw-terminal blocks. This makes it easy to semi-permanently wire in sensors, LEDs, etc. There's also a 4-block terminal block broken out to 0.1" pads for general non-GPIO wiring. Finally, we had a little space remaining over the metal connectors so we put in an SOIC surface mount chip breakout area, for those chips that dont come in DIP format.

This kit comes as a set of parts, a little soldering is required to put it together but its really easy, even a beginner can do it in 15-20 minutes or so. The Pi (and our kits) are meant to help us all learn skills, soldering is fun!

The nice thing about this plate is we're getting custom header breakouts that are taller than usual, so that the proto plate sits above the metal connectors, out of the way and allows for plenty of workspace. It fits in our Pi Box enclosure with access to the terminal blocks so you can keep the Pi safe while prototyping. We'll have stackable header kits as well for those who want to put multiple plates on top.

For more information, including some usage ideas check out our Proto Pi Plate tutorial

The Raspberry Pi® is a single-board computer developed in the UK by the Raspberry Pi Foundation with the intention of stimulating the teaching of basic computer science in schools. The design is based on a Broadcom BCM2835 system on a chip (SoC), which includes an ARM1176JZF-S 700 MHz processor, VideoCore IV GPU, and 256 megabytes of RAM. The design does not include a built-in hard disk or solid-state drive, instead relying on an SD card for booting and long-term storage. The Foundation plans to support Fedora Linux as the initial system software package/distribution, with support for Debian and Arch Linux as well - Wikipedia.