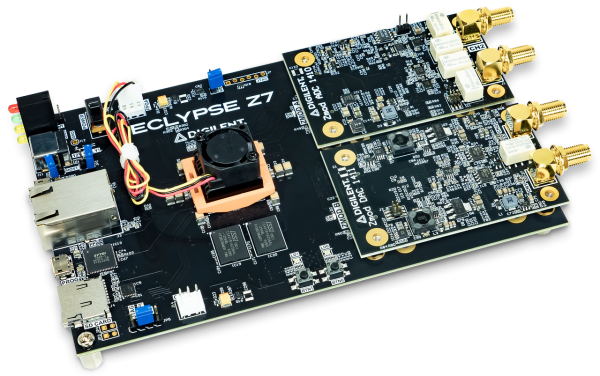 Zmod is Digilent’s new expansion solution using the open-source SYZYGY standard from Opal Kelly. Faster than the Pmod Standard and more compact and cost-effective than FMC, Zmods improve the customizability options for high-speed I/O. Plug in your application specific Zmods and get up and running in hours or days, instead of weeks or months. Two Zmods are being released alongside the Eclypse Z7, the Zmod ADC 1410 and Zmod DAC 1411, both with 100 MSPS, 14-bit converters, with more planned in the future.

The Eclypse Z7 is a component of the Eclypse Platform, which pairs Digilent’s open software API with Digilent’s novel Eclypse hardware. Petalinux is supported out of the box, and pre-built Linux images are accompanied by the API for bulk data transfer. This system allows users to plug in their Zmods of choice and get started prototyping new high-speed measurement, instrumentation and control systems without directly interfacing with the FPGA until desired. With this system, embedded Linux developers can leverage the power of FPGA without possessing hardware expertise. Currently, C and C++ are supported, with plans to add support for other programming languages in the future.