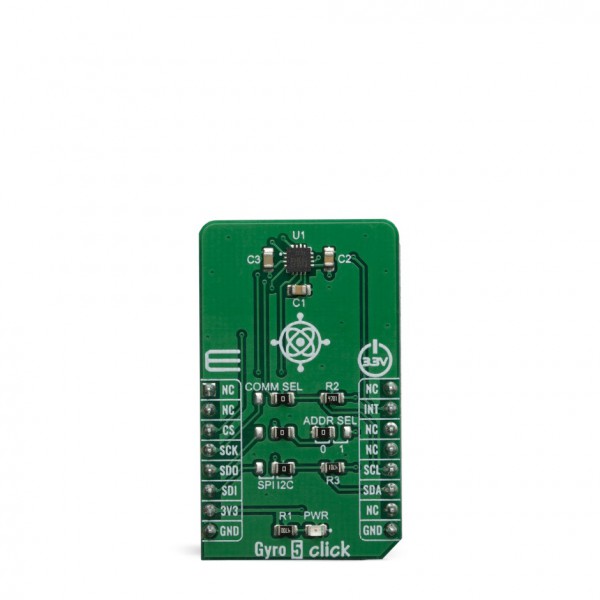 Gyro 5 Click is a three-axis gyroscope Click board™ that can sense motion over three perpendicular axes. It is equipped with the ITG-3701, a three-axis digital gyroscope. This IC incorporates microelectromechanical sensing elements (MEMS), produced using a proprietary CMOS micromachining technology. This technology allows for excellent stability and linearity over temperature. The angular data is available in a 16-bit format, along with device’s die temperature data. Gyro 5 click can be used for angular speed up to 4000 degrees per second (dps), it features a FIFO buffer, two dedicated interrupt lines, and on-chip data processing for optimized firmware development.

Gyro 5 click is supported by a mikroSDK compliant library, which includes functions that simplify software development. This Click board™ comes as a fully tested product, ready to be used on a system equipped with the mikroBUS™ socket.

The ITG-3701 IC supports both I2C and SPI interfaces, which allows Gyro 5 click to be interfaced with a wide range of different MCUs. Although it is very sensitive (down to 65.5 LSB/dps) it is very resistant to shock and has a non-linearity of only 0.3% of the full-scale value (FS). These features make Gyro 5 click a perfect solution for the development and testing of a wide range of applications which rely on an accurate angular rate sensing. This includes gyro-stabilization for various types of robots, drones, UAVs and RC vehicles, game controllers, orientation sensing, gesture-based HMI applications, VR glasses, and similar types of applications.

Gyro 5 click is based on the ITG-3701, a three-axis digital gyroscope sensor IC, by InvenSense Inc TDK Group Company. This device features factory calibrated scale factor, High cross-axis isolation via proprietary MEMS design and a precision clock with 1% drift from -40°C to 85°C, which results in a high level of integration, allowing very good linearity over temperature, and increased output stability when no motion. It also makes it resistant to shocks up to 10,000g, allowing it to be used for speeds up to 4000 dps. It supports signal conditioning including low-pass filtering, as well as the programmable interrupt. 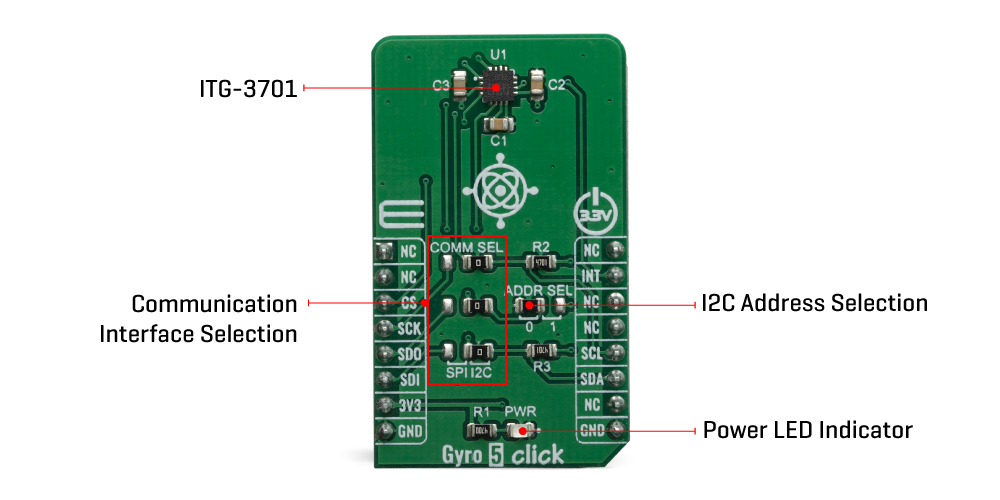 Typically, higher dps range results in lower sensitivity. Therefore, the ITG-3701 allows to dynamically select the full-scale range (FSR) value in several discrete steps: ±500, ±1000, ±2000 and ±2000 dps. This allows optimized performance for a given usage scenario. For example, if used in applications with faster angle rates such as sports equipment monitoring (golf club or tennis racket), a higher FSR might be required, at a cost of lower sensitivity.

The MEMS output voltage is sampled by a high-accuracy 16-bit A/D converter, allowing the output in 2’s complement format. As mentioned above, different FS ranges have different sensitivity per LSB. Therefore, raw output values of the sensor will have to be multiplied with the sensitivity to obtain the values in degrees per second (dps). These values can be obtained from the ITG-3701 datasheet, for every FS range, respectively.

The ITG-3701 sensor feature an internal programmable low-pass filter, with user-selectable cutoff frequency. The output signal can be digitally selected and applied to an angular speed measurement, allowing the developer to reduce the noise or fine-tune the sensitivity within a desired bandwidth.

The ITG-3701 device features a FIFO buffer, which in combination with a dedicated interrupt line, allows firmware optimizations while reducing the power consumption of the application as a result. The FIFO buffer has 32 slots, each 16-bit wide, used to store output values. The FIFO can lower the traffic on the serial bus interface, and reduce power consumption by allowing the system processor to burst read sensor data and then go into a low-power mode. A FIFO counter keeps track of how many bytes of valid data are contained in the FIFO. The FIFO register supports burst reads, while the interrupt function may be used to determine when new data is available.

The interrupt pin is routed to the mikroBUS™ INT pin (labeled as INT). This line is used to report one of the programmable FIFO events: watermark level is reached, FIFO buffer is empty, and there is an overrun event on the FIFO buffer (FIFO is full). The pin can also be used to report when there is a new data available at the output after the conversion period (data ready). To find out which event exactly has occurred, the host MCU should read the status of the respective flag bits from the INT_STATUS register.

Gyro 5 click offers two communication interfaces. It can be used with either I2C or SPI. The onboard SMD jumpers labeled as COMM SEL allow switching between the two interfaces. Note that all the jumpers have to be positioned either I2C or to SPI position. When I2C interface is selected, an additional SMD jumper labeled as ADDR SEL becomes available, determining the least significant bit of the ITG-3701 slave I2C address.

This table shows how the pinout on Gyro 5 click corresponds to the pinout on the mikroBUS™ socket (the latter shown in the two middle columns).

We provide a library for the Gyro 5 click on our LibStock page, as well as a demo application (example), developed using MikroElektronika compilers. The demo can run on all the main MikroElektronika development boards.