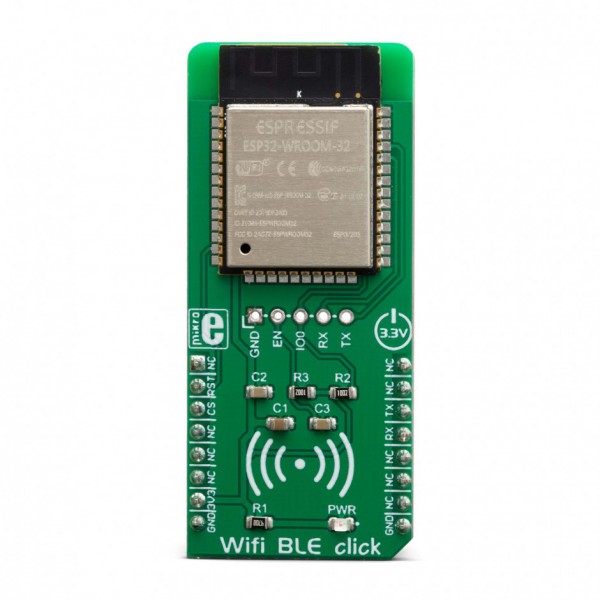 WiFi BLE click is supported by a mikroSDK compliant library, which includes functions that simplify software development. This Click board™ comes as a fully tested product, ready to be used on a system equipped with the mikroBUS™ socket.

Over time, ESP WiFi modules became a synonym for IoT WiFi applications. The ESP32-WROOM-32 module is built on the success of its predecessors, namely ESP8266, bringing more processing power (up to 240MHz), more peripherals, and lowered power consumption (down to 5 µA in Deep-Sleep mode). The ESP32-WROOM-32 combines both WiFi, and BT/BLE connectivity options, allowing both long and short-range wireless connectivity, depending on specific requirements. Reliable and easy to use, WiFi BLE click is a perfect solution for development of various IoT applications, smart home applications, WiFi enabled toys, advanced robotics, and other similar applications.

WiFi BLE click is equipped with the ESP32-WROOM-32, a generic WiFi and BT/BLE module produced by Espressif Systems, which is based on the ESP32-D0WDQ6 chip, a powerful 32-bit wireless SOIC, running RTOS. It is operated by a set of AT commands, over the UART interface, which makes the WiFi BLE click very easy to use. By integrating most of the critical components on the chip, the ESP32-D0WDQ6 allows the module to overcome any imperfections of external discrete components, allowing signal transmission power of up to 20dBm, and -97 dBm sensitivity for the BT NZIF receiver. 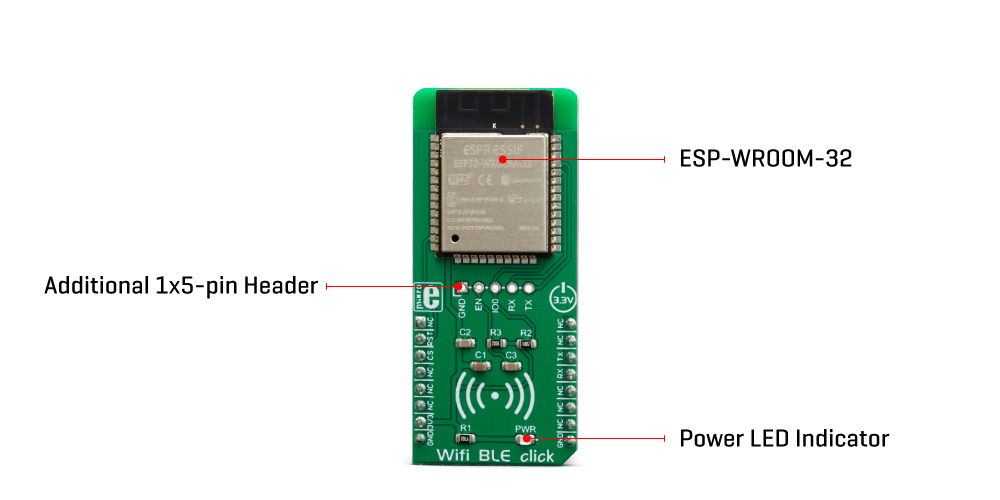 By combining both WiFi and BT technologies, the ESP32-WROOM-32 module offers a choice between using WiFi for large area coverage and Internet connectivity, or point-to-point and PAN BT connectivity. WiFi can be power demanding, while BT, on the other hand, ensures minimalistic power consumption rates.

WiFi BLE click offers the basic WiFi and BLE functionality, not exposing all the pins of the module. As such, it is meant to be used as an add-on to an existing application. However, it is equipped with the programming header, which exposes UART programming pins, along with the boot mode selection pin (IO0) and the Reset/Enable pin (EN). If the IO0 stays at a LOW logic level after the module is reset, it will boot into the serial bootloader mode. The firmware can be then programmed over the RX0 and TX0 pins, located at the additional 1x5-pin header on the Click board™.

The EN pin is also routed to the mikroBUS™ CS pin, and it is used to reset the Click board™ by the host MCU. Again, by setting the CS pin to a LOW logic level, the ESP32-WROOM-32 module will be reset. Most of the ESP-WROOM-32 module pins are configurable and multiplexed with other functions. One such pin is provided for a reference (IO14) and it is routed to the RST pin of the mikroBUS™.

The communication with the host MCU is done over a dedicated UART interface. RX and TX pins of the mikroBUS™ are routed to the appropriate pins of the module. The host MCU can send commands and receive responses over the UART interface, allowing the ESP32-WROOM-32 to perform various operations. The default baud rate of the ESP32-WROOM-32 module is 115200.

The real power behind the ESP-WROOM-32 module is in the usage simplicity. By sending a simple macro over the UART, the WiFi BLE click can be easily used to establish an internet connection and do some additional tasks. By utilizing its GPIOs (multiplexed with some other functions), the WiFi BLE click can perform some additional tasks on its own. Besides the official mikroSDK compatible library and its and functions, there is a comprehensive programming guide available for download, which explains each AT command in more details. It can be used for application development, along with the provided demo example.

This table shows how the pinout on WiFi BLE click corresponds to the pinout on the mikroBUS™ socket (the latter shown in the two middle columns).

We provide a library for the WiFi BLE click on our LibStock page, as well as a demo application (example), developed using MikroElektronika compilers. The demo can run on all the main MikroElektronika development boards.

Alongside with the demo application timer initialization functions are provided. Note that timer is configured acording to default develoment system and MCUs, changing the system or MCU may require update of timer init and timer ISR functions.