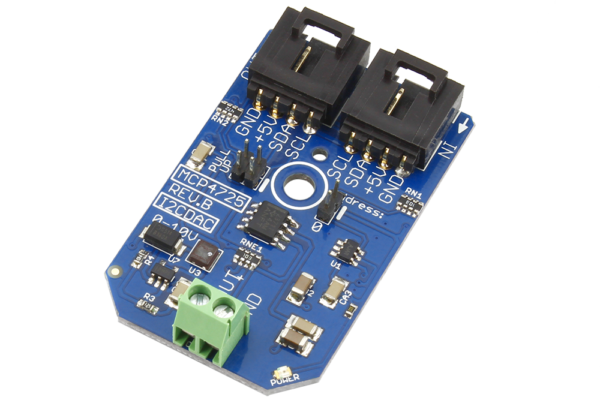 Digital to analog conversion devices play a major role in data acquisition. There is a large number of devices and equipment which are controlled using voltage variation that require a 0-10V signal. If you are looking for a 0-10V digital to analog DAC board then look no further. This One Channel 0-10V I2C Digital to Analog converter is also known as 0-10V DAC or 0-10V voltage output. This mini module comes with I2C communications so you can interface with all major micro controllers with I2C communications. This device uses the MCP4725 I2C DAC equipped with on-board power boost circuit and a rail-to-rail signal amplifier. This power booster and signal amplifier takes 0-5V from the DAC and converts into 0-10V DAC signal. The 0-10V output is programmable with 12-bit resolution, allowing 4,096 possible output voltages across the span of 0-10V ±1%. This 0-10V Digital to Analog converter board comes with I2C address jumper for changing the I2C address, allowing two 0-10V DAC controllers to share the same I2C bus.  If your application requires more than two of these controllers, consider using a i2c multiplexer controller, which allows you to connect multiple 0-10V DACs with one I2C master device. This 0-10V DAC supports three modes: standard 100kbps, fast 400kbps and high speed 3.4Mbps.  Interface this 0-10V DAC with Raspberry Pi, Arduino, Onion Omega, Beaglebone, Windows, Particle Photon or any Linux computer using our extensive line of I2C adapters (see the compatibility tab for links).

Applications for this I2C 0-10V DAC mini module include sensor calibration, valve controllers, sprinklers, light fixture controllers, data acquisition and much more.  This device is intended for use in applications that may require retrofitting older hardware with modern electronics for IoT interface applications.  Control this 0-10V DAC over the internet using popular cloud computing platforms including Azure and Particle or from Windows and Linux computers.

What is the NCD I2C Interface?

NCD I2C devices will plug in to any available NCD I2C Output.  This includes just about everything we make in the NCD IoT Category, including all NCD IoT devices.  We also manufacture a wide range of I2C adapters that make it easy to plug NCD I2C Devices directly into most computing platforms.  The NCD I2C Interface adapters are available for Arduino, Banana Pi, BeagleBone, Bluz, C.H.I.P., ESP8266, Onion Omega, Particle Photon and Electron, PyCom, Raspberry Pi, 2, 3, and Zero, and Windows.  We are always working to add new platform support for NCD I2C devices.  NCD I2C Interface devices are compatible with just about everything in the microcontroller industry.

Based on our plug-and-play I2C interface standard, all NCD I2C devices are equipped with a I2C output port, making it easy to expand to a wide variety of sensors, current monitors, relay controllers, PWM controllers, and much more!  We are always designing new expansions for our modular plug-and-play I2C framework.  We are dedicated to building a product line of interconnected devices to simplify all forms of automation.  Re-use or upgrade your hardware in seconds by selecting the modules that best fit your needs, and chaining them together using the included I2C expansion cables!