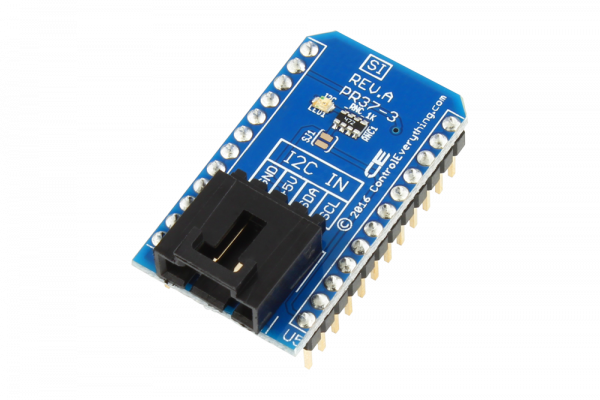 This product is currently not available.
Please inform me as soon as the product is available again.
₹439.00 *

Description Evaluations 0
Description
The SI adapter is used to convert any of controllers equipped with a IoT Interface Socket into a... more
Close menu
Product information "I2C to IoT Interface Adapter"

The I2C output connector of your favorite computing platform will connect to the I2C Input provided by the SI adapter.

What is the nodeLynk I2C Interface?

nodeLynk I2C devices will plug in to any available nodeLynk I2C Output.  This includes just about everything we make in the NCD IoT Category, including all NCD IoT devices.  We also manufacture a wide range of I2C adapters that make it easy to plug nodeLynk I2C Devices directly into most computing platforms.  nodeLynk I2C Interface adapters are available for Arduino, Banana Pi, BeagleBone, Bluz, ESP8266, Onion Omega, Particle Photon and Electron, PyCom, Raspberry Pi, 2, 3, and Zero, and Windows.  We are always working to add new platform support for nodeLynk I2C devices.  nodeLynk I2C Interface devices are compatible with just about everything in the microcontroller industry.

Based on our plug-and-play I2C interface standard, all nodeLynk I2C devices are equipped with a I2C output port, making it easy to expand to a wide variety of sensors, current monitors, relay controllers, PWM controllers, and much more!  We are always designing new expansions for our modular plug-and-play I2C framework.  We are dedicated to building a product line of interconnected devices to simplify all forms of automation.  Re-use or upgrade your hardware in seconds by selecting the modules that best fit your needs, and chaining them together using the included I2C expansion cables!