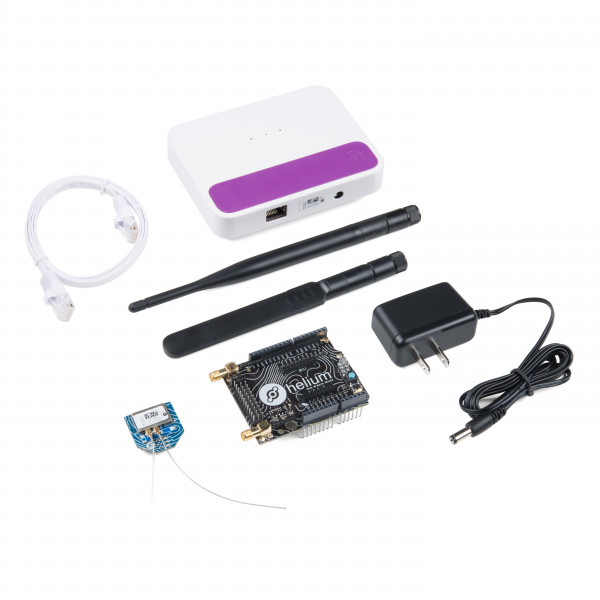 The Helium Ethernet Starter Kit for Arduino includes everything needed to easily give your embedded devices secure, long-range connectivity. This kit was built specifically for Arduino and mbed development boards to get them set up and ready for wireless and IoT applications!

Included in this version of the Helium Ethernet Starter Kit is a Helium Arduino/mbed Adapter, a shield with two SMA connectors and an Atom socket — all in an R3 layout. You also receive one 2.4GHz and one Sub-GHz antenna, a Helium Atom Prototyping Module and a Helium Element Access Point for Ethernet connectivity with an Ethernet cable and power adapter. The only thing you need to supply yourself is an Arduino development board (like SparkFun RedBoard or an Arduino Uno R3) and a way to power it!

Since Helium is a complete toolkit for building IoT applications that can connect to public clouds, a pre-built, secure connection from Atom modules interacts with what are called Helium Channels. Channels are a convenience layer between sensors and your organization’s cloud of choice that can connect to public clouds like Amazon Web Services, Azure, Google Cloud IoT Core or a private offering. Channels can also be used to send device data to applications and services via generic protocols like HTTP and MQTT.