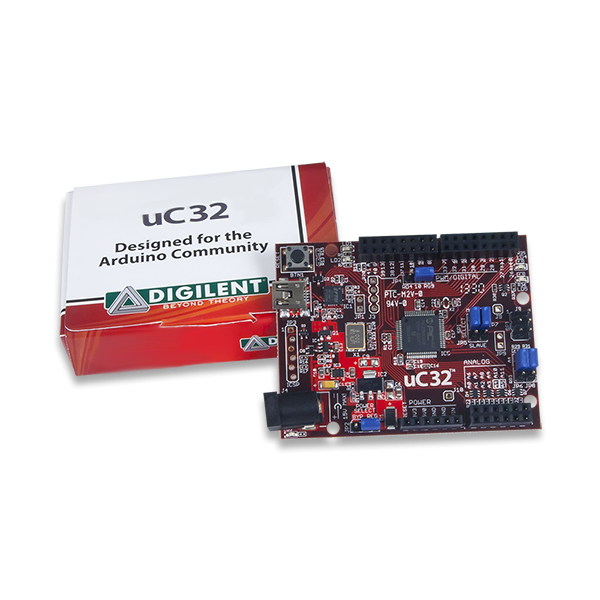 The uC32 is a prototyping platform that adds the performance of the Microchip® PIC32 microcontroller. The uC32 features a USB serial port interface for connection to the IDE and can be powered via USB or an external power supply. The board takes advantage of the powerful PIC32MX340F512 microcontroller, which features a 32-bit MIPS processor core running at 80 MHz, 512K of Flash program memory, and 32K of SRAM data memory.

The uC32 can be programmed using MPIDE, which supports PIC32. It contains everything needed to start developing embedded applications. In addition, the uC32 is fully compatible with the advanced Microchip MPLAB® IDE and the PICkit3 in-system programmer/debugger.

The uC32 is easy to use and suitable for both beginners and advanced users experimenting with electronics and embedded control systems. It provides 42 I/O pins that support a number of peripheral functions, such as UART, SPI, I2C ports, and pulse-width modulated outputs. Twelve of the I/O pins can be used as analog inputs or as digital inputs and outputs.

For additional platform-specific support for your board, visit Digilent's forum at forum.digilentinc.com.