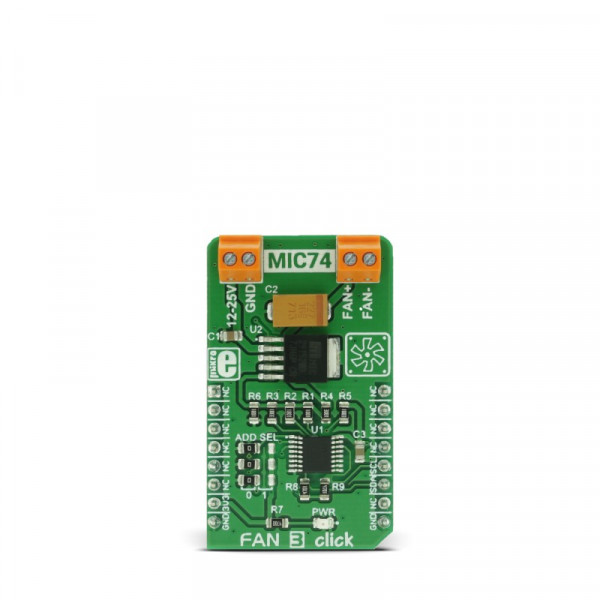 Description Evaluations 0
Description
A fan is a simple device that creates a flow within some fluid - such as the air, causing the... more
Close menu
Product information "Fan 3 click"

A fan is a simple device that creates a flow within some fluid - such as the air, causing the heat accumulated in one section of the fluid to be moved away from the heat source, effectively cooling the affected area. The faster the fan rotates, the faster the fluid moves. This movement causes an audible noise which is one of the most obvious reasons why the fan speed control is needed, especially when the fan is used to cool down electronic components, such as the personal computer.

Fan 3 click is the perfect choice for speed control and it can operate in seven discrete speed steps. Unlike the PWM regulation which can sometimes cause the infamous coil whining effect on some types of fans, this click board outputs the selected voltage via the MIC29152 voltage regulator from Microchip, driven through the MIC74 - a serial to parallel I/O expander and a fan controller from the same company, keeping it constant at the output. Fan 3 click works with 12V to 25V on its input connector and can be used whenever a noiseless solution with a variable fan speed is needed, for example - cooling of electronic components with the minimal possible noise produced.

Fan 3 click uses two ICs to control the speed of the fan. The first IC is the MIC74 from Microchip, which is a serial to parallel I/O expander and fan controller. The four most significant bit outputs can be used to implement the fan speed control. This device uses an I2C communication protocol to set up the dedicated internal registers. The CLK and DATA pins are routed to mikroBUS™ I2C pins. Also, those pins are already pulled up with the 4k7 resistors on the click board, so there is no need to use additional pull-up resistors.

The three most significant bit outputs are equipped with the resistors, connected to the feedback input (ADJ) of the MIC29152 IC - a high current, high accuracy, low dropout voltage regulator from Microchip. This regulator is used to output the regulated voltage for the fan, determined by the feedback voltage on the ADJ pin. The output of the regulator is set to 12V when the maximum speed is selected. The recommended input voltage should not be much higher than 12V because in that case, the regulating efficiency won't be optimal and the excess power will be dissipated as the heat. The voltage regulator features an internal power limiting logic, which protects it from damage in case of an excessive load on its output.

Individual open-drain output bits of the MIC74 are selectively grounded or allowed to float under the control of the internal state machine, so the equivalent resistance seen by the MIC29152 regulator’s feedback path is raised or lowered, changing the output voltage that way. The fourth bit is set to work as the SHDN which is used to enable the voltage regulator, via its EN pin when the fan mode is selected by the I2C. Setting this bit will activate the voltage regulator and the fan will start turning with the speed defined by the MIC74 registers.

Fan 3 click can be used on several different I2C addresses, selectable by the ADD SEL jumpers. Those jumpers are used to directly set A0 to A2 address select pins of the MIC74. By default, all address pins are grounded, which sets the slave I2C address to 0x20h.

MikroElektronika offers libraries with functions which allow simplified control over this click board. The example can also be used as a starting point or a reference for your own application code.

This table shows how the pinout on Fan 3 click corresponds to the pinout on the mikroBUS™ socket (the latter shown in the two middle columns).

We provide a library for Fan 3 click on our LibStock page, as well as a demo application (example), developed using MikroElektronika compilers. The demo can run on all the main MikroElektronika development boards.

The library contains a function that controls the operation of Fan 3 click.

This click board is supported with mikroSDK, the MikroElektronika Software Development Kit. To download mikroSDK visit LibStock.