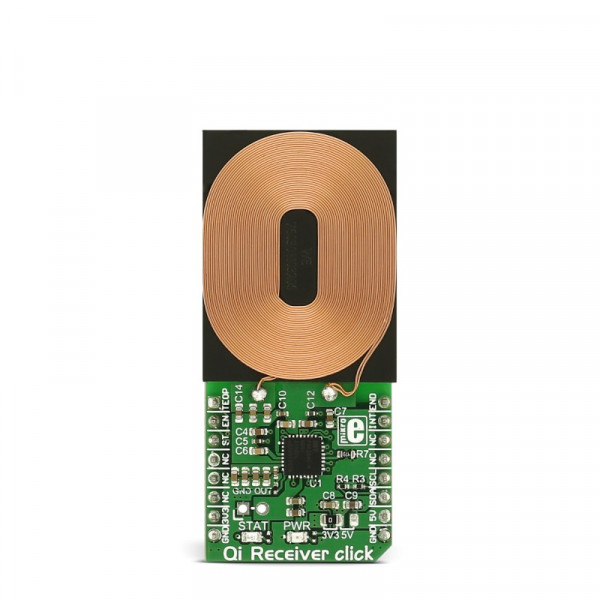 The click utilizes the effects of the electromagnetic induction to wirelessly transfer energy, a phenomenon in which the electromotive force (i.e. voltage) is generated across the electrical conductor, under the influence of a variable magnetic field. It uses the planar copper coil as an inductive element. Qi Receiver click relies on the wireless power transfer standard, developed by the Wireless Power Consortium, to both provide and monitor current and voltage. This standard involves digital communication, used to transmit the information back to the charging pad. Depending on the received information packets, charging pad regulates the strength of the variable magnetic field, which in return generates more or less power on the receiver coil.

When Qi Receiver click is placed on a WPS Qi compliant charging pad, it responds to the transmitter's "ping" signal, by rectifying the AC power from the transmitter and storing it on a capacitor connected to the VRECT. During the "ping" phase, the rectifier provides about 5V at the VRECT pin. An internal linear voltage regulator provides the supply voltage for the digital section of the P9025AC, enabling the Qi protocol communication, so that the receiver can synchronize with the charging pad. After the initial synchronization, the system enters the Power Transfer state and the actual power transfer process is started, which is indicated by the Status LED. The voltage on the output connector of the Qi Receiver click is kept constant and it’s 5.3V, so the eventual voltage drops under a heavy load are accounted for. Since the P9025AC can withstand up to 5W, it should be able to deliver up to 1A of current, on the output header VOUT.

One special feature of this device is the possibility to detect foreign metal objects in its field. The presence of the foreign metallic objects in the charging field can be unwanted - even dangerous. When found in the alternating magnetic field, the metal object can be heated up by the eddy currents that are generated inside of it. Also, this heat can be translated into a power loss, which can be especially problematic if the object is actually a part of the power harvesting device.

To overcome this problem, the P9025AC employs advanced FOD techniques to both accurately measure its received power, and to accurately compensate all of its known losses. This compensation is implemented by means of a curve fitting table. This table supports up to 10 different curves stored in OTP (One Time Programmable) memory and one volatile memory location, programmed by the I2C bus. Additionally, the selected fitting curve can be offset by 300mW, by the means of a resistor connected to the FOD2 pin, so even better power adaptation can be achieved.

The click also features the overvoltage, overcurrent and thermal shutdown. If any of these conditions occur on the output terminal, the LDO gets shut down and the End of Power packet is sent, so the charging pad also stops transmitting the power. Additionally, an interrupt can be generated on the INT pin of the Proximity 3 click.

Note: This device can’t be used to charge the batteries on its own. It can be coupled with the specialized battery charging circuitry, as for example Charger click so that the harvested power can be used for battery charging, too.

This table shows how the pinout on  Qi Receiver click corresponds to the pinout on the mikroBUS™ socket (the latter shown in the two middle columns).

Note: Headers for additional pins come with the packaging, so the users can solder them on the front or on the back of the board, according to their needs.

We provide a library for the Qi Receiver click on our LibStock page, as well as a demo application (example), developed using MikroElektronika compilers. The demo can run on all the main MikroElektronika development boards.

This library contains functions for reading from and writing to the registers of Qi Receiver click.

This example demonstrates reading of Qi Receiver registers. It will output the VRECT value and IOUT value. The VRECT can be used to indicate how well the receiver is placed, where higher values mean that the position is better. The IOUT is the output current of the system.

Depending on the development board you are using, you may need USB UART click,  USB UART 2 click or RS232 click to connect to your PC, for development systems with no UART to USB interface available on the board. The terminal available in all MikroElektronika compilers, or any other terminal application of your choice, can be used to read the message.