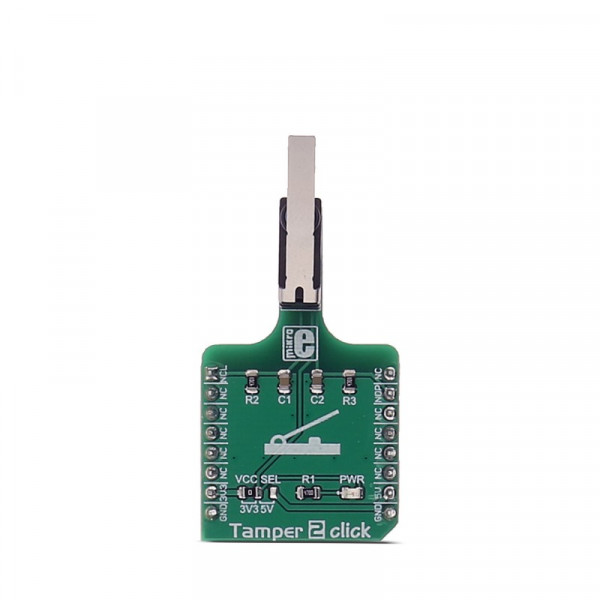 Tamper 2 click contains a levered D2HW-A221D switch by Omron, which outputs signal in both positions - pressed and released. Omron switches, also known as microswitches, are well renowned for their reliability and endurance. The PCB of this click is designed so that the lever of the microswitch is easily accessible, making the click useful for all kinds of different applications, where precise, two position switches are required. Both the NO (Normally Open) and NC (Normally Closed) pins of the microswitch are routed to mikroBUS™, so it can be easily connected to the microcontroller.

Switches of this kind are widely used in many different applications. The most common use of the Tamper 2 click is door opening or closing detection, detecting the end of travel of a linear actuator, a Morse code input device and so on.

Tamper 2 click contains a levered D2HW-A221D microswitch by Omron, specifically positioned on the board so it is easily accessible for interacting with various objects that could press the lever, activating the microswitch that way. The microswitch is actuated by applying very little physical force, using a tipping-point mechanism which results in fast and reliable snap-in action. It also has both NC and NO contacts routed to the mikroBUS™ so both states of the switch can be detected. Both lines are equipped with the RC filters, which serve as debouncing elements for the switch and also to pull down the lines when they are left afloat. This way, the contact bouncing is reduced even further, resulting in an accurate detection of the switching event. The click board™ also features an onboard jumper selector, which is used to select the voltage level that is connected to the microswitch input pin, making it usable for both 3V3 and 5V capable microcontoller pins.

This table shows how the pinout on Tamper 2 click corresponds to the pinout on the mikroBUS™ socket (the latter shown in the two middle columns).

We provide an example for the Tamper 2 click on our LibStock page, as well as a demo application (example), developed using MikroElektronika compilers. The demo can run on all the main MikroElektronika development boards.