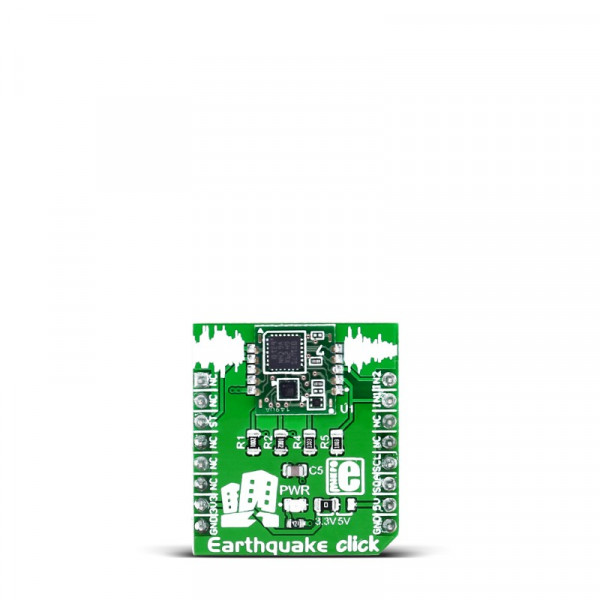 Earthquake click carries D7S, the world’s smallest high-precision seismic sensor from Omron. The click is designed to run on either 3.3V or 5V power supply. It communicates with the target MCU over I2C interface, with additional functionality provided by the following pins on the mikroBUS™ line: PWM, INT, CS.

When an earthquake occurs with a seismic intensity equivalent to 5 Upper or higher on the JMA (Japan Meteorological Agency) Seismic Intensity Scale, the D7S will activate the shutoff output to notify the user that an earthquake has occurred.

I2C interface is able to obtain earthquake-related information from the sensor with communications from external devices.

The SI value (or spectral intensity) is equivalent to the magnitude of the destructive energy imposed by seismic motion on structures.

The power consumption during standby is 90 μA or less. On average, during processing, the sensor uses around 300 μA.

JMA or Japan Meteorological Agency intensity scale is used in Japan and Taiwan to measure the intensity of earthquakes. The scale goes from 0 to 7. The level 5 on this scale indicates when objects inside a house start falling down, like books from the shelf, dishes in a cupboard, cracks are formed on walls, etc.

This table shows how the pinout on Earthquake click corresponds to the pinout on the mikroBUS™ socket (the latter shown in the two middle columns).

Code examples for Earthquake click, written for MikroElektronika hardware and compilers are available on Libstock.

The following code calls initialization functions, and then checks the status and SI value registers every 5 seconds.