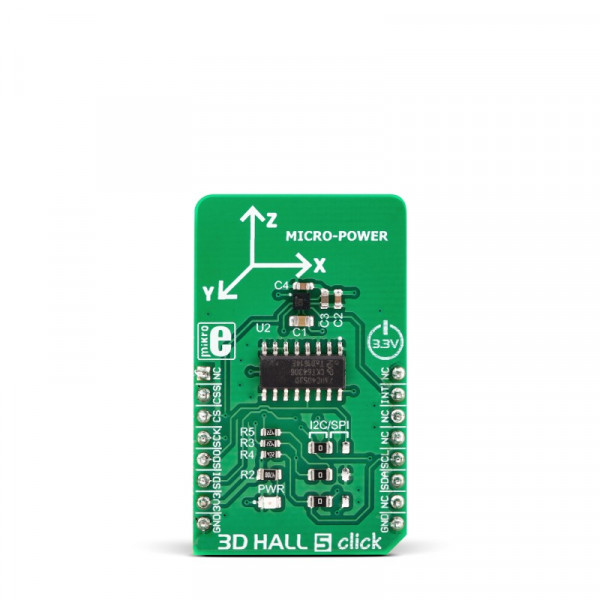 The features such as the embedded self-test, support for the hard iron compensation, selectable power mode, 16-bit data output, a wide dynamic range of the measurement (±50 gauss), all make this sensor a perfect choice for various IoT applications. The internal non-volatile memory contains the calibration parameters, making the Click board™ a very accurate spatial magnetic sensor, perfectly suited for the development of various position sensing applications, contactless knobs, encoders, switches, and potentiometers, or some other type of magnetic field measuring application, based on an accurate spatial sensing.

3D HALL 5 click carries the IIS2MDCTR, a low power 3D magnetic sensor, from STMicroelectronics. This sensor relies on a Hall effect to accurately sense magnetic field changes on three perpendicular axes. The internal magnetic field sensing elements are multiplexed and connected to a 16bit low noise Analog to Digital Converter (ADC), which sequentially samples each sensor, providing 16-bit spatial data over the digital interface. An additional thermal sensor is also available, and it is used for thermal compensation. 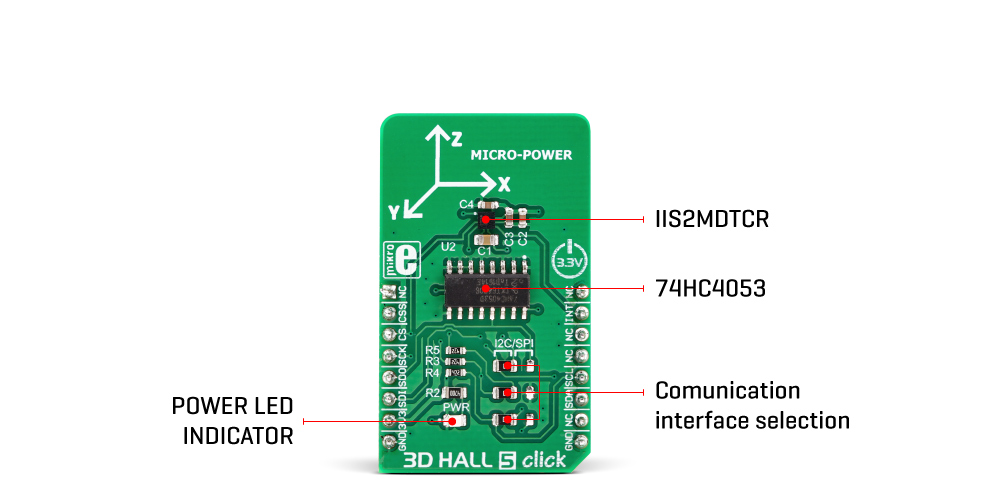 The magnetic sensor has a very low pin count. Therefore, SPI and I2C lines are multiplexed on the same pins. In addition, the SPI data in (SDI) and SPI data out (SDO) share the same pin. In order to allow functionality for both SPI read and SPI write functions, 3D HALL 5 click incorporates another IC: the 74HC4053, a triple 2-channel multiplexer/demultiplexer IC from NXP is used in conjunction with the RST pin of the mikroBUS™, labeled as CSS. This allows to demultiplex the SDI/SDO pin of the IIS2MDCTR and route the two resulting pins to appropriate pins of the mikroBUS™ (SDI and SDO).

The rest of the communication interface selection procedure relies on switching the appropriate SMD jumpers, grouped under the I2C/SPI label. Note that all of the I2C/SPI group jumpers need to be switched at the same side: all three should either be soldered as I2C or SPI. If one of them shows in the opposite position from the rest, the communication with the IC might not be possible.

The sensor provides raw data output, based on a strength of the magnetic field. The measurement is affected by many factors: slight manufacturing differences between ICs affect the readings, even the slight differences between Hall plates within the same IC might affect the accuracy, although the IC contains highly matched sensing elements. Also, the altitude might affect the readings, as well as temperature changes. Therefore, the sensor IC is equipped with the thermal sensor, used to measure the influence of the ambient temperature. Unlike errors which occur due to the influence of other parameters, the influence of the temperature is not linear, so a proper firmware development approach by using LUT tables is highly advisable.

The power mode, output data rate, interrupt thresholds for each axis, and other working parameters, including the availability of the I2C interface, are contained within the configuration registers of the IIS2MDCTR magnetic sensor. The sensor is highly configurable, with many configuration options. The IIS2MDCTR datasheet contains an in-depth explanation of all the registers and their functionality. However, 3D Hall 5 software library contains simplified functions that allow straight-forward readings to be performed, reducing the steps needed for a proper initialization and configuration of the device.

This table shows how the pinout on 3D HALL 5 click corresponds to the pinout on the mikroBUS™ socket (the latter shown in the two middle columns).

We provide a library for the 3D HALL 5 Click on our LibStock page, as well as a demo application (example), developed using MikroElektronika compilers. The demo can run on all the main MikroElektronika development boards.

The library initializes and defines the I2C bus or SPI bus driver and drivers that offer a choice for writing data in register. The library includes function for read magnetics X/Y/Z axis data, set offset, read interrupt state and read temperature. The user also has the function for initializes chip.