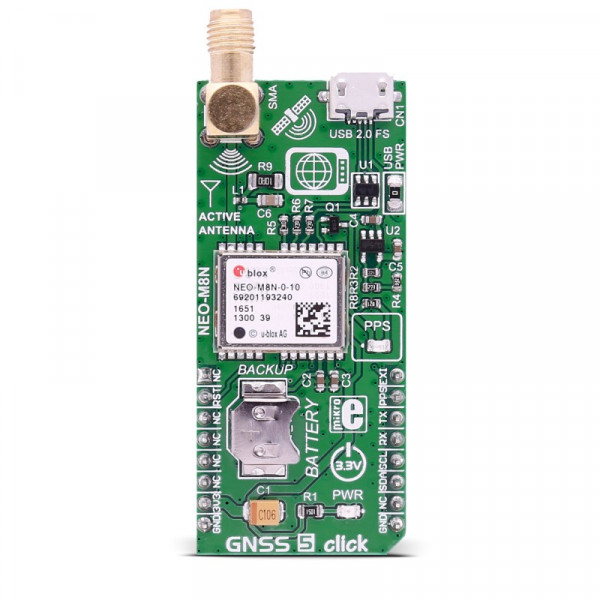 Determine your current position with GNSS 5 click. It carries the NEO-M8N GNSS receiver module from u-blox. GNSS 5 click is designed to run on a 3.3V power supply. The click communicates with the target microcontroller over I2C or UART interface, with additional functionality provided by the following pins on the mikroBUS™ line: RST, INT, PWM. A USB interface (micro USB port), which is compatible with the USB version 2.0 FS (Full Speed, 12 Mbit/s), can be used for communication as an alternative to the UART.

The USB port can be used as a power supply as well if you need the click board™ to be a standalone device.

The NEO-M8 series utilizes concurrent reception of up to three GNSS systems (GPS/Galileo together with BeiDou or GLONASS), recognizes multiple constellations simultaneously and provides outstanding positioning accuracy in scenarios where urban canyon or weak signals are involved.

Hardware Backup Mode - If the main supply voltage fails, and a battery is connected to V_BCKP, parts of the receiver switch off, but the RTC still runs providing a timing reference for the receiver. This operating mode enables all relevant data to be saved in the backup RAM to allow a hot or warm start later. If the user wants to utilize GNSS to determine a position, they must have an antenna that receives the signals coming from the satellites, and a receiver that translates these signals. The antenna position will be deduced from the measurements of the time delay between the emission time (satellite) and the reception time (receiver) for at least 4 signals coming from different satellites.

This table shows how the pinout on GNSS 5 click corresponds to the pinout on the mikroBUS™ socket (the latter shown in the two middle columns).

Code examples for GNSS 5 click, written for MikroElektronika hardware and compilers are available on Libstock.

The following code snippet shows the function that feeds the data into a buffer until the sentence is ready for parsing, and sets the appropriate flag when such event occurs.