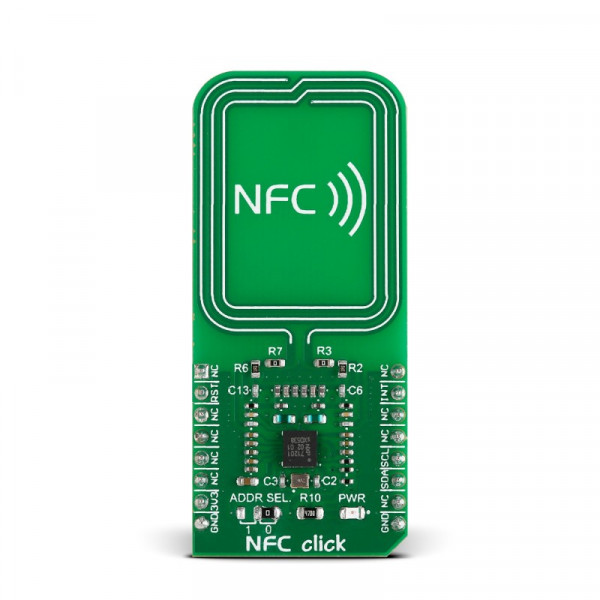 NFC click is a mikroBUS™ add-on board with a versatile near field communications controller from NXP — the PN7120 IC. NFC devices are used in contactless payment systems, electronic ticketing, smartcards, but also in retail and advertising — inexpensive NFC tags can be embedded into packaging labels, flyers or posters.

This board has full compliancy with NFC Forum specifications which means that you will be able to use the full potential of NFC and its three distinct operating modes:

In other words, NFC click can be set to behave either as an NFC reader, or a tag, or to establish a two-way connection with another NFC device.

Fully compliant and easy to integrate

The NXP’s PN7120 IC integrates an ARM™ Cortex-M0 MCU, which enables easier integration into designs, because it requires fewer resources from the host MCU. The integrated firmware provides all NFC protocols for performing the contactless communication in charge of the modulation, data processing and error detection.

The board communicates with the target board MCU through the mikroBUS™ I2C interface, in compliance with NCI 1.0 host protocols (NCI stands for NFC controller interface). RST and INT pins provide additional functionality. The board uses a 3.3V power supply.

NFC is designed to be intuitive for users. Communication between two devices is established in the simplest way possible — by bringing them close to each other. The standards are dictated by the NFC Forum. NFC frontends, like the one on this click, can operate in three distinct modes:

In this mode, NFC click emulates an NFC tag. It doesn’t initiate the communication, it only responds to an NFC reader. A typical application of the card emulation mode is how people use NFC in their smartphones to replace several cards, badges and tags at once (using the same phone for tollgate checkins, contactless payments and so on). Card emulation mode, however, is not useful just for smartphones, but for any type of portable device.

2. Read/Write — where NFC click behaves as an NFC Reader

Here, NFC click communicates with a passive tag, smartcard, or an NFC device operating in card emulation mode. It can both read or write to a tag (although reading is a more common use-case because tags will often be write protected). In this mode, it is NFC click that generates the RF field, while a tag or card only modulates it.

Peer-to-peer mode establishes a two-way communication channel between a pair of NFC-enabled devices. More complex interactions are possible in this mode, such as simplifying bluetooth pairing. When a user brings two devices close to each other, the two NFC chips establish a P2P connection and exchange data that facilitates the Bluetooth pairing, seamlessly — the user doesn’t have to type passwords or set configurations.

Note that NFC is a subset of RFID working on 13.54 MHz. Therefore, an NFC IC can read/write ISO14443 RFID tags, and vice verca — compatible RFID readers (such as RFID click) can read NFC tags or NFC devices functioning in card emulation mode.

The module also has a highly integrated demodulator and decoder, as well as buffered output drivers to connect an antenna with minimum number of external components.

The tap-and-go nature of NFC makes many areas of life more convenient. From mobile payments to advertising, from home automation to building security.

NFC is already pervasive and widespread. As it is a standard feature of newer smartphones, many people carry an NFC chip with them at all times. There are many innovative uses and applications that are yet to be discovered, many markets that are yet to be tapped.

You can use it in all devices requiring NFC functionality especially those running in an Andrond or Linux environment. Use it in TVs, set-top boxes, Blu-ray decoders, audio devices or home automation, gateways, and wireless routers. Printers, IP phones, gaming consoles, the list goes on and on.

The following diagram shows the protocols that correspond to each operating mode:

Note that NFC is a subset of RFID working on 13.54 MHz. Therefore, an NFC IC can read/write ISO14443 RFID tags, and vice verca — compatible RFID readers (such as RFID click can read NFC tags or NFC devices functioning in card emulation mode.

The board has one SMD Jumper (ADDR SEL.) which is used to determine the I2C address. By default is on 0.

The Libstock example shows the Read/Write and Card Emulation modes of NFC click. A tag or phone is detected when it approaches the field of NFC click (2-3cm). The example is available for both clicker 2 and Hexiwear.

Code examples for NFC click, written for MikroElektronika hardware and compilers are available on Libstock.